The prize she wins may be his heart. 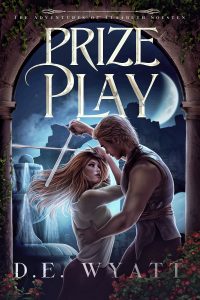 A glorious contest of arms awaits in the City of Ain.

Seeing an opportunity long denied her to demonstrate her mettle, Elsabeth has been drawn to Ain by a gathering of the most celebrated masters of arms from across Navarre and Boehm, summoned to a conference on their art by Sir Stemham Crosseby, Master of the Longsword. The foremost attraction of the event is the Playings — A testing of his students before the eyes of the Count of Ain himself.

Elsabeth seeks the unthinkable: To find a way onto the platform and face the flower of Navarrese and Boehman swordsmanship. With all of Ain sensationalized — and the gathering of masters scandalized — by the audacity that a woman might dare to fight, Elsabeth is unprepared when the prize she could claim upon the scaffold is no less than the heart of Crosseby himself.

But when Elsabeth finds herself in a chance reunion with an old enemy from her days under Paulus von Soest’s tutelage, it threatens to bring the new life she hopes to build in Ain crashing down around her. Will she be able to see the challenge through to win her prize? Or will this twist of fate conspire to take away everything she has been fighting for?

Set in a world based upon mid-15th Century Western Europe, Prize Play continues The Adventures of Elsabeth Soesten. The series follows the travels and travails of mercenary adventuress Elsabeth Soesten through genre-blending encounters with unscrupulous clergy, manipulative lords, and dangerous outlaws. Armed with only the skill of her own sword-arm and the sharpness of her wit, Elsabeth seeks to make her fortune on her own terms, while wreaking havoc on a society where few things are more certain to cause a scandal than an independent woman.

Preview
Coming Soon
Back To Series
All Books